Takin' Your Music to the Cloud 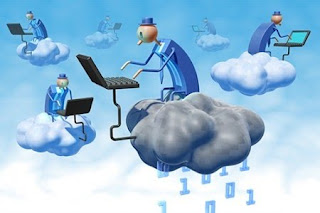 This week Amazon launched a major new online locker service called Cloud Drive. It is so named because it follows the current trend of “cloud computing,” which is just a fancy name for “online.” If you use gmail or yahoo mail, you’re already engaged in “cloud computing,” and all it really means is that you’re accessing something (music, email, word-processing functions) online instead of from your device’s internal hard drive, SD card, or other internal storage medium.

As far as digital data being moved around in cyberspace, Amazon is hardly doing something revolutionary. YouTube and Rhapsody have been streaming their content to you from the Web since their inception. But Amazon is unique and ahead of the curve in one respect: Cloud Drive is specifically targeted to music listeners and purchasers of music on Amazon Music, and it beat to the punch both Apple and Google, who were concurrently developing similar services.

Here’s how it works: You buy a tune from Amazon Music, just like you normally would. But instead of the file being downloaded to your computer, as is done now and as Apple’s iTunes does, the song is shunted over to your locker in Cloud Drive. When you want to listen to your song, you just “summon it from the cloud”—that is, have it streamed to your player. You also have the option of downloading it, of course, just like a conventional MP3 purchase. And you can also upload your own tunes, ones that didn’t come from Amazon. Amazon gives you your first five gigabytes of storage free, with songs purchased through Amazon not counting against that amount. Accessing your music—Amazon-purchased and self-uploaded—is smooth and elegant using Amazon’s browser-based interface.

Digital music vendors needed to take this step, and Amazon was the first, so they should be applauded for their forward thinking. Subscription music services are growing and the convenience of streamed music is convenient and reliable. It’s only the record companies’ tight grip on their product—and their cluelessness in taking advantage of digital distribution methods—that have prevented such services from emerging before. In fact, when mp3.com tried to introduce the very same business model in the past, they were shut down by panicked but powerful legal forces in the record industry.

But Amazon isn’t so easily cowed by record companies. Since they already sell you music (as iTunes does), they’re just introducing the intermediate step of storing it for you. When asked by Billboard Magazine if he thought to seek licenses from the labels, Amazon’s Director of Music Craig Pape replied, “We don’t believe we need licenses to store the customers’ files. We look at it the same way as if someone bought an external hard drive and copied files on there for backup.” In other words, “We don’t need no stinking licenses.”

Cloud Drive users will enjoy several benefits. First, you don’t have to worry about storage space on your mobile device. You have access to thousands and thousands of tunes, but they don’t all need to be physically resident on your device. You also don’t have to keep up with the sometimes confusing process of synching several devices and keeping track of which one is up to date (a routine some of my non-technical friends still can’t wrap their heads around). Another bonus is the issue of backing up. I don’t care how careful you are, Amazon is better at it, and their servers will always be more reliable than any individual’s hard drive, DVD, or data stick.

The one obvious disadvantage is that you can’t hear your music where there’s no online access. And if you’re not in a Wi-Fi hotspot, you’ll eat up cellular minutes by listening to music. This will become more of a concern as carriers move away from unlimited data plans to tiered-usage ones. And there’s one aspect that may be a disadvantage, depending on how you feel about it: Amazon will now have one more way to track and monitor your listening habits.

Another aspect that may not be seen initially as a disadvantage, but that will certainly provide bumps in the road for everyone, is that record labels are being shut out of the “digital music locker” revenue stream if only Apple, Google, and Amazon can provide them—and do so without additional licensing from the labels for this new delivery medium (one that is growing in use). That will just spell trouble for everybody, if only for the distractions that the inevitable lawsuits will generate.

But the horse is out of the barn, the gauntlet has been thrown down, and there’s no going back. Once Google and Apple follow, the record companies will have to focus on getting a share, rather than trying to turn back the tide. Even with a few setbacks and sideshows, the technology of Cloud Drive and its ilk are a boon to mobile music listeners everywhere.
Posted by Jon Chappell at 1:54 PM