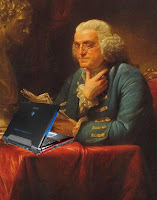 As Ben Franklin famously opined, "Only three things in life are certain: death, taxes, and a new Apple model announced in the spring." Okay, he obviously didn't contribute the last bit (he was more of a Linux guy), but it might as well be added to that short list of life's inevitabilities. Industry watchers and consumers fearing a seasonal bout of buyer's remorse dread the early part of every new year, because the rumors start flying about what you would have gotten if you had only waited. Sure, there will always be something new on the horizon, but it doesn't mean you can't demonstrate bad timing in your purchasing.

For example, in the second week of April 2010, my family wanted to do something nice for me: surprise me with a new Apple laptop. I hadn't had a new Mac in years, preferring to staple on upgrades to my ancient G5 until it was a computational Frankenstein, wheezing and belching just to keep up with simple tasks. A new MacBook Pro was certainly in order. And my birthday was in mid-April.

But my tone-deaf reaction to my new, surprise gift was that my loving family had exhibited spectacularly bad timing in buying this "new old stock" laptop. As gently as I could, I pointed out that if they had waited three days, they could have chosen from the new crop of laptops that featured the faster i5 and i7 processors and the extended-capacity battery technology. Off we went to the Apple Store for a full refund. I returned four days later and was one of the first in line. And, in time, they forgave my ingratitude.

But really, how could a normal (i.e., not technology-obsessed) person possibly know about "expected releases" if he didn't spend way too much time lurking on blogs and message boards to glean—with no firm evidence—that Apple always releases a new computer in the spring and a new iPhone in the summer? One can't; one just "has to know." But even if you don't need the latest and greatest, it still makes sense to wait for the new releases, as the price for last year's model will drop significantly. If you're OK with a used or eBay-purchase, your buying leverage goes up significantly.

So here we are in Q1 of 2011, and the frenzy of new tech is upon us. If you're looking to buy a new tablet and consider one running Honeycomb (Android's tablet-specific operating system) as a worthy competitor to the Apple iPad, boy, do you have your work cut out for you! You will be spending a lot of time reading through reviews and sorting hype from reality. Be consoled knowing that much the same fate awaits phone and computer buyers of course.

In fact, so chaotic is this spring season of new tech that we actually have two announced technologies with the same name: Thunderbolt. To smartphone shoppers, the name refers to HTC's latest flagship Android-based model, due out in mid-March. To computer users, Thunderbolt is the new communications protocol invented by Intel and that will appear on new Apple MacBook Pro laptops.

If you haven't heard of Thunderbolt (the computer-related one, that is) until this editorial, you need to read up on it at Apple's website, as well as your favorite message boards, including this informative thread in the Harmony Central forums. It will significantly change how you move data and signals to your peripherals, and has profound potential for high-bandwidth pursuits like high-def video, high-resolution and surround audio, and large-project and system backups. Thunderbolt has some compelling specs besides superior I/O throughput speed (20 times faster than USB 2.0, 12 times faster than FireWire 800, and twice as fast as USB 3.0) too. Of course, it will backwardly accommodate USB and FireWire for now, but T-Bolt champions hope to ultimately replace those two aging technologies. That's by no means inevitable, however. Remember, we still have USB 3.0, which is less than a year old and is an upgrade to a proven platform. Plus, you already own the cables for it. We will just have to live through it to see how it all shakes out.

One thing is for sure though: A year from now, you won't even consider a device that doesn't supersede Thunderbolt (if it's a smartphone), or—if it's a computer—includes it or offers an alternative, whether that's USB 3.0 or something else. Either way, your vocabulary must now include this stormy compound word. And like some technological Thor, you will need to wield it with authority in order to prevail.
Posted by Jon Chappell at 2:52 PM

hi..Im student from Informatics engineering, this article is very informative, thanks for sharing :)