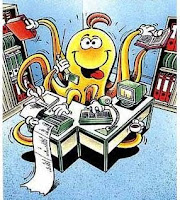 Everyone thinks that multi-tasking is a good thing—or at least a necessary skill worth mastering for these modern times. Well, just because we’re forced into multi-tasking for work and home life doesn’t mean it’s healthy. Witness texting while driving: That’s multi-tasking, and that’s clearly an unsafe, bad, illegal thing to do. Many experts argue that simply talking on a cell phone in a car is dangerous, and that the whole “hands-free” loophole doesn’t really address the basic problem—that dividing your concentration ultimately makes you less successful at either activity.

It’s proven more and more that humans don’t process in parallel, and the best they can do is serial processing quickly, and they’re not even really good at that. We are, as a species, uni-taskers. Or at least we’re at our best when uni-tasking. Think of all the great feats of human achievement in sports and inspired musical performances. From pitching a perfect game to playing a flawless version of the Minute Waltz, what’s the common ingredient? Focus!

Those of us who work creatively should take note of the basic lesson of texting-while-driving and apply it to our own pursuits. If you have Facebook, Twitter, Skype, and Instant Messenger open—plus a beep and a little window that appears whenever a new email arrives—are you really going to be able to concentrate on a demanding problem? Not likely. Because the sad fact is, you use these little interruptions as an excuse to break away from the difficult tasks that face you. These tasks don’t even really have to be that odious or unattractive; even if they’re just a little taxing, you find ways to avoid them.

Even very-accomplished, mega-prolific sorts deal with the same productivity-soaks that us mere mortals do. For example, best-selling author Jonathan Franzen has rigged his computer that it can’t get on the internet. How? By gluing an Ethernet cable into the port of his laptop, and then cutting off the end. Glue? Yes, glue. That’s how serious (or weak-willed) he was. And this is a guy who clearly has discipline and makes millions through writing—and finishing—long books. So if that’s what it takes for him, wouldn’t you do the same thing?

Now, you don’t actually have to go through the process of permanently destroying a part of your computer to achieve isolation (though you have to admire Franzen’s commitment). You can simply disable the networking. A program called Freedom (ironically, the name of Franzen’s latest novel) will disable your computer’s ethernet and wireless functions for up to three hours at a time. The only way to get them back is to reboot. By the time you’re doing that, hopefully you’ll catch yourself and stop. You might think that buying a separate program to help you with your vow of social-networking silence is gimmicky, but consider that the real danger in online distractions is how insidious they are: you go to them without even realizing it! So any help here is worth serious attention.

Many productivity specialists tell us to just cut out the multi-tasking. Some refer to it as “chunk time”—where you’re “allowed” to do only one thing during certain hours of the day: compose, practice your axe, or manipulate loops, but not do email, answer the phone, or check Facebook and Twitter. Other “attention management consultants” (this is a real term) will tell you to create separate stations for separate tasks. I practice this at home: Even though I use a computer for music creation as well as online surfing, word processing, and Photoshop, I keep the music separate. It’s the most important thing I do, so it gets the better environment (my man-cave/studio as opposed to my family-shared office) and the better machine (my new Mac vs. my old PC).

This helps me focus my attentions on music—at least when I’m in the music space. The trouble is, I can’t quite bear to turn off the internet yet on the music computer. But at least I am more aware that when I’m in the music space, I shouldn’t be Facebooking. Perhaps I will install Freedom on that machine. That seems a better solution than injecting glue into the ports. Or maybe I’m just not dedicated enough. How far would you go—if it meant you could be really productive?
Posted by Jon Chappell at 8:46 AM